Dog is almost worse than having a child (young or the version of a grown man) when it is “me” time.  By now, you should know that Dog knows EVERY movement I make and what each movement means to him.  Never forget “It is all about Dog”.

To give a little background, Saturday and Sunday mornings have always been my time to rebel against the work week mornings.  You know when you have to get up and immediately have your feet running when they hit the floor.  This girl’s feet never hit the floor running; crawling maybe.  But, running?  Nope.  This girl doesn’t run!  Unfortunately, I have not always had the luxury to rebel on weekends depending on who is in my life, whether it be Man or Dog, or God help me, Both!!!!

I used to love to “leisurely” read the newspaper while I drank two cups of coffee on Saturday and Sunday mornings.  Now, it is Facebook (“FB”), Twitter (news/weather), and coffee. 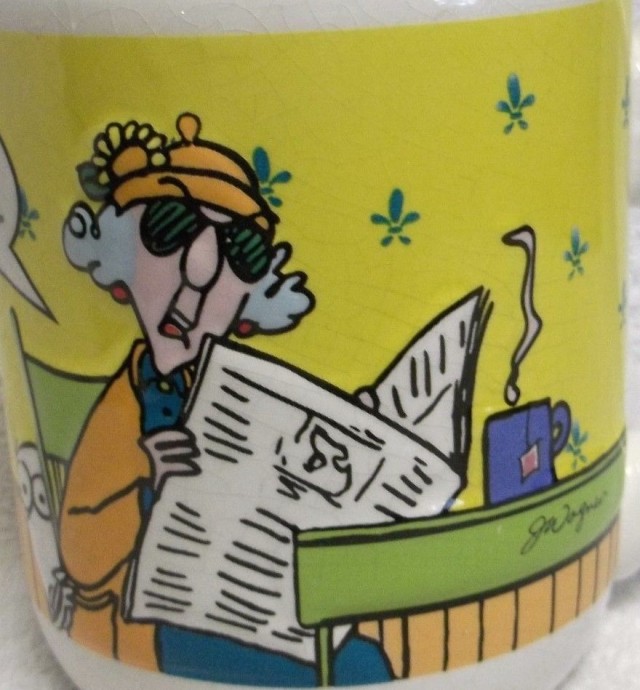 Rebellion time has to be done perfectly or it does not work.  For it to be leisurely the following are a must:  PJs and/or robe, bed hair (unbrushed) up in a whatever will hold it, and coffee in one of my favorite mugs.   If I have to shower and get dressed first or even just get dressed, it ruins the moment!!!  I used to walk out to the road dressed as Maxine to get the newspaper which is about block away!  And there were times, especially during the winter, that it was questionable!  Can we say Christmas Tree?  Big ol’ Green Terry Cloth Bathrobe, Ugly Red Knee-High Socks, and whatever warm boots I could throw on in a hurry. I didn’t care as I was freezing and wanted my newspaper while still in my PJs.  I knew trying to train Dog I or II to fetch the newspaper would not work as there were too many deer and other critters in the area.  Outside the gate, GONE!

Well, when I was married, this wasn’t even a possibility.  While Hubby read the paper, I was forced to slave in the kitchen making breakfast.  If I tried to read the paper after cleaning the kitchen, I was given five to ten minutes to get ready if I wanted to go wherever Hubby announced he was going.  Needless to say, I have been divorced for 27 years.  I have been engaged four times, but I have the Runaway Bride routine down pat (that’s a Southern term for “quite well” for you Northerners).  Me and commitments do not play well together.

Post-hubby, I had roommates that stepped up to the plate taking over the not allowing me my “Me Time”.  One roommate, who also was one of my besties and we will call “Roomie”, would start talking and talking and talking every time I tried to read the paper.  I would read one paragraph about five times before I would tell Roomie,   “If you will let me read this newspaper, I will let you talk ALL day long!”  After our roommate status ended, Roomie would call me on Sunday mornings just to tell me, “I heard you turning the page!”

It was at this point I started notifying family and friends that you COULD call before 11 a.m., but it did not mean I would answer.  In other words, do not call before 11 a.m. on weekends.  Period.  Well, that didn’t pertain to a few select people.   Just as soon as I would hit “like” or post on FB, telephone rings!  Dog starts howling.  Aunt Maxine had to answer the phone and I hear, “I saw where you are up!”   My reply?  “Barely!”.  There are a few people that I just cannot ignore because for one,  I choose not to, and two, they won’t let me! Hahaha!   (Seriously though, I loved those times as they were “Our Time”.)

Over the last few years, I have debated in my mind and with friends about whether or not I really want someone in my life.  Am I willing to give up:  1) My Maxine weekend mornings?  2) No cooking on weeknights and cooking only when I want to do so?  3) Eating what I want when I want?  4) Come and go as I please?  5) Buying as many pairs of shoes as my checkbook allows? 6) Dressing like Maxine and not worrying about being the Glamour Girl 24-7?   Hmmmm… nope.    Is there such a thing as a part-time companion who is there when you want him and gone when it’s time?    Hmmm… Nope.  Not that I have found at least.

Instead, I now have Dog.  Dog has taken over the no “me time”.    Since moving to the country about 17 years ago, I have had a dog.  This is Dog II.  Dog I died in December of 2005 and Dog II moved in January, 2006 at two years of age.  I have a tendency to spoil children and puppies.  Dog I and Dog II were no different.

Dog knows that if I awake to the alarm clock, he will receive his breakfast, go outside, and then not receive the treats until just before I walk out the door to leave.   [Note:  Remember that his treats  consist of pills with grilled chicken, glucosamine chews (he loves) and Dentastix (which he also loves). ]  On the mornings without the alarm clock, he knows he will receive his breakfast, go outside for about five minutes and immediately drive me nuts until he receives the treats!  Then it is me getting up and down to let him in and out.  (Those are my rebellion mornings now.  I have resigned myself to the fact that I will not get peace and quiet until Dog’s “It is all about me” has been taken care of.

Oh, but Dog does not stop there.  He is in and out.  I get up to let him out only to have him back at the sliding glass doors staring at me wanting back in because it is too hot outside.  Okay.  Go lay down.  I return to FB and coffee only to have him back nudging my arm.  WHAT???  Walks toward door.  But, when I ask, “Do you want to go outside?”  He plops down.  He isn’t going anywhere.  He wants another treat or fresh water.   Or just to drive me nuttier!!!  Sigh …

After about three to four trips to/from the sliding glass doors, I hear my mother yell, “IN OR OUT!  MAKE UP YOUR MIND!!!”  Yikes!  Was that my voice?  At this point, he gets his feelings hurt and goes to the bedroom pouting.

And, always remember, Ya Gotta Laugh!